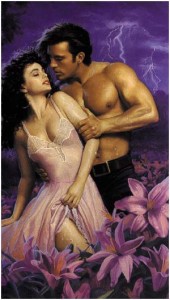 Want to know what’s in the minds of single women today? Look no further than the annual Harlequin Romance Report, a survey of 1500 single women aged 18-40. The ground-breaking study looked at romance, sexuality, gender roles, and yes, technology with an aim to understanding modern mating.

Let me start with the good news. An overwhelming majority of women polled (89%) feel that their best days are ahead of them. Women are optimistic that romance is out there and they will find it. Surprisingly, this optimism was even strong with single woman aged 36-40.

All good, except for the bad news. Nearly 60% of women polled do not experience romance in real life and 64% even called their dating life “boring.”

Okay, time for a Dr. Wendy analysis here. So what, exactly is “romance” anyway? I would say that romance is a set of behaviors, usually exhibited by men, designed to woo and attract a potential female mate. Traditional romantic gestures might involve candle light, wine, good food, chocolate, jewelry, and traditionally gentlemanly behaviors.

Back in our hunter/gatherer days, romance evolved as a way convince a female that a male wouldn’t bring harm if she chose to mate with him. You see, sex was (and still is) a high-risk hobby for women. Women are more likely to contract an STD, come down with an 18-year case of parenthood, or be susceptible to a broken heart. Today because of birth control and barrier protection, some of these risks have been reduced. But certainly not all. Still it seems that women are left holding the bag – the diaper bag that is. Fourteen million single mothers are raising one in four American children. Yes, sex had consequences for women that men are adept at avoiding.

But women, it seems, didn’t get this memo. As they have risen in economic power they have also adopted a male model of sexuality, that is, they are having sex for pleasure as much as relationship building and procreation.

As for romance, well it takes two to tango. If a man need only text a hook-up in on any given night, why would he bother to arrange a date, do the driving, open doors, pull out chairs, and pay the check? Here’s the blunt part, ladies, You can’t have it both ways. You can’t expect a man to work hard to obtain something that is hard to get, and then hand it to him before he even gets to strut his stuff. One man told me on my Facebook thread that women these days are too impatient and don’t pause long enough to let him be romantic.

Finally, according to the Harlequin study, women’s romantic needs have evolved. Traditional romantic gestures are less popular. Ranking low of women’s list of wished for romantic gestures? Jewelry, flowers, and chocolate. Instead women want men to remember the small details, be protective, and be willing to do some of the things they want to do. Sigh. So simple. Go shopping. Watch a chick flick. And then maybe it’ll be even easier to text in that hook up.

There are online florists that offer flower delivery to help spark romance.

One thought on “FOR SINGLES: The Slow Death of Romance?”