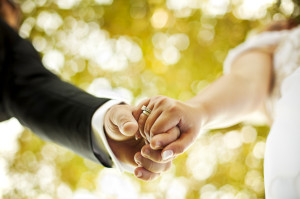 An analysis released to USA TODAY reveals what so many of us already know: the U.S. marriage rate is low and in fact, has reached its lowest point in over a century. But this decline may not apply to you. While the economic recession resulted in the number of marriages decreasing by more than 5%, this study predicts there will actually be more weddings among the over the next two years.

The low rates of marriage are mostly related to two factors: couples eschewing legal marriage and instead dipping their toes in commitment by co-habitating and the recession, that makes couples slower at saving money for the big nuptial bash.

But the future looks brighter for some who want to get married. Not everyone will experience the decline firsthand – U.S. birth forecast provider Demographic Intelligence anticipates a 4% bump in the number of weddings from 2009. According to the study, women ages 25-34, the college-educated, and the affluent, are likelier to soon exchange vows than those with a high school education or less, younger Americans, and the less affluent – all who’s marriage rates are stagnant or steadily decreasing. In lower socio-economic classes, marriage and parenthood have become two distinct concepts and the middle-class is beginning to follow suit. But in the highly educated and high earning group, marriage rates highest and predicted to be going up.

Of course, there are the naysayers. Some demographers, including co-director of the National Center for Family & Marriage Research at Bowling Green University, fear this study may be “overly optimistic.” In a 2012 report conducted by the center, Manning and her team found that one-third of people that said, “I do” last year were not marrying for the first time, and that these remarriages were not among younger generations.

Manning also points to the fact that the average age of first-time brides and grooms is getting older each year. Three years ago, the average age was 28.2 for men, and 26.1 for women, compared to the estimated 29.2 and 27.1, respectively, by 2015. What’s more is that experts, including Demographic Intelligence president Sam Sturgeon, expect these numbers to only continue escalating – and for at least another decade.

Bottom line: Get a graduate degree, a good job and by the time you hit the age of 27, you’ll be part of that lucky group of “marriage-eligible Millennials.”

One thought on “FOR SINGLES: Is Marriage in Your Future? Why Money & Education Matter”