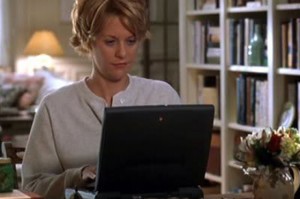 A new study, underwritten by eHarmony and published in the journal Proceedings of the National Academy of Sciences, shows that percentage of married couples that began their courtship through an online meeting is nearly 35%. That doesn’t man they all met on online dating sites. Of that 35%, just under half met on dating sites but the other found each others’ profiles on online social networks, internet chat rooms, and even through instant messaging. More couples may be meeting online but are they having healthier or happier marriages? The study says that the respondents to their questionnaire “were slightly less likely to result in a marital break-up (separation or divorce) and (had) slightly higher marital satisfaction among those respondents who remained married.”

But if things were so cozy with online couples, wouldn’t we see the divorce rate of newly marrieds drop by 35%? In truth, that pesky 50% divorce rate that the media bandies around, only applies to marriages that have lasted for more than twenty years. At the twenty year mark, those who have stayed together for the children (a statistically good choice for their offspring) often bail for the retirement years. In fact, at the five year mark, couples have an 85% chance they will stay together for life. And that number declines as the years rise.

In this new study, nearly twenty-thousand married people responded. They had all been married recently, between 2005 and 2013,  when marriages tend to be happiest. And, I would bet my bottom dollar that if someone had gone to the trouble of setting up a profile, carefully selecting a mate and then choosing to respond to a survey about my marriages, they would defend their choices by claiming great marital satisfaction.

There is this widespread belief that the key to having a happy marriage is to be very specific about partner selection. I disagree. A good marriage isn’t about finding a good partner, it’s about becoming a good partner. And with this generation of adults who were children of divorce, poor relationship skills are being transmitted from one generation to the next. Conflict resolution skills are the most important factor in a healthy relationship and divorcing parents only teach kids how to withdraw and run from conflict. The message that’s passed down is very very careful how you choose. So people who want to commit to marriage are meeting online, but are the marriages really any more secure? In the end, happiness is related to our expectations. If we believe we are happy, then we are.

One thought on “FOR SINGLES: More New Marriages Begin Online But How Do They End?”