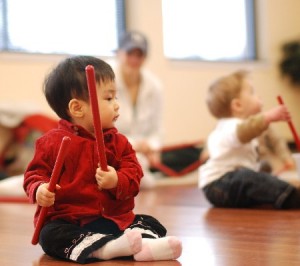 The Sound of Music was a movie beyond it’s tine. Linking baby mozart to math skills may not have held up to research scrutiny  but there is new promise that music can do something else for kids: Make them behave better and solve problems.

Researchers from the University of West London School of Psychology examined how music made young children, aged four, more helpful and sociable. Dr. Maddie Ohl, Dr. Anne Manyande and undergraduate student, Rie Davies split 24 girls and 24 boys into two groups, ‘Music’ and ‘No Music’. Children in the ‘No Music’ Group listened to a story, while children in the ‘Music’ Group sang and played small percussion instruments. After the sessions, the children were tested for problem solving abilities with a ‘Helping’ game.  The results found that children who were in the ‘Music’ group, boys and girls, were more helpful than children in the ‘No Music’ Group; they were 30 times more likely to help than their music-less counterparts. Results also showed, girls were greater than 20 times more likely to help than boys of the ‘Music’ Group. The ‘No Music’ Group also showed less co-operation than the ‘Music’ group, whose co-operation was six times greater than their counterparts. Girls excelled again, and demonstrated more co-operation than boys. But when it came to problem solving boys in the ‘Music’ Group were four times more likely to problem solve than their peers.
The results of this study show that pre-schooler music class isn’t a useless endeavor forced on kids by uber mommies. And the researchers suggest that even singing can be highly beneficial.  So, belt it out babies!

One thought on “FOR PARENTS: Singing Kids Behave Better”