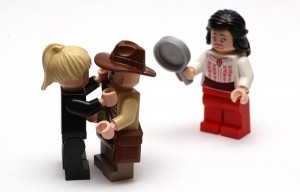 People often pose the question to me, is cheating really that bad? Does it have to be a deal breaker in a relationship? My answer is no. Sometimes a discovered act of infidelity can bring a couple closer as they work through the pain and come to a place of understanding and forgivness.

But open marriages are different. First of all, permission to cheat does not remove the inherent risks of introducing a third or fourth body to the relationship, risk that include STDs, a broken heart if the new partner isn’t prepared, or even a potential stalker. These are things an imaginary fling would never have.

Let’s break it down to biology. For most men, sex can be just sex. However, women have the hormone oxytocin released during orgasm and sexual activity that bonds many women with a sexual partner. For many women having sex is much more than just a romp. It’s an emotional act. Many argue that women cheat as often and in the same way as men. The research shows that women do cheat, but still not as often as men, and a good proportion of those women cheat because they are looking for a new relationship.

Some people believe that monogamy is a term invented by modern day humans. Many think nature is nature, deer and rabbit can’t have an affair, so the same should apply for humans. Here’s the thing: we are human! We are much more evolved than a deer or a rabbit. Our elaborate social systems were designed to create pair bonds that endured long enough to get offspring up and out of the womb.

Is an open marriage possible? The only condition under which an open marriage can work, is for a short period. Sooner or later someone always gets hurt. Someone becomes bonded to someone else, or age-old feelings of jealousy creep up to the surface. Think about it. Every story you’ve ever heard about a successful open marriage is told in past tense. The relationship ended.

I believe that infidelity is a symptom of a problem anyway. Infidelity alone is not the problem. And even permissive cheating has emotional underpinnings that should be explored. But I want to hear from you, would you let your significant other cheat?

WATCH MY DISCUSSION ON CNN ABOUT THE SUBJECT: