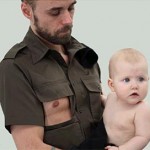 Let me start by saying that if you are a woman and you’re reading this — likely true — I need you to do something. Stop reading this now. This is a message to men, and the boys club is a closed room. This post is not for female eyes. This is a private appointment between a man and his doctor. Okay, ya gone, ladies? Good.

Dudes. I’m about to break the girl code and tell you some things that are only whispered in Mom circles. If your wife or girlfriend or baby mama is pregnant, you need to know this. If all three are pregnant you really need to know this. Seriously. Listen up guys, this may be your only chance to get the scoop on the dark and confusing playing field of nocturnal nursing and sunlight suckling that you are about to enter. It’s a crazy world that you surely didn’t sign up for. But you’re here. So, man up.

Now, we all understand the primary job of your babaloos, I mean, that is, your wife’s babaloos. Yes, God put those fabulous twins on earth entirely for your pleasure. Period. But God also gave them a stint of hard labor as punishment for all the naughtiness they have performed. It’s called breast feeding. And during this time of hard labor, you will be the holder of the keys — the jail guard if you will. You are about to oversee the work camp of a breast feeding mother. And, lemme tell ya guys, this gig is not for the faint of heart.

Let’s start with the answer to “why” you would ever consider taking on such a job. Here’s the main reason: When those bombs reach their glory producing and storing human milk in such seductive containers, well, let’s just say the beauty of it all can bring a grown man to stinging tears. Oh there are a couple other reasons why you might want to encourage her to enlist in breast feeding boot camp. Like seven separate psychological studies that link breast feeding with IQ points. In your kid. Not the Mom. She’ll get smart again after she weans. Besides having a fighting chance at being on a path to an Ivy League school, your  breast fed kid will also be drinking the most perfect human protein. Body builders and pro athletes would covet the stuff. Yep, I’m talking about the ultimate muscle building food not seen since Poppies’ can of spinach. If only it were bottled. Wait. It is bottled. By those glories twin orbs that will be bursting with life in your bedroom.

Too bad you don’t get to touch them. At least, not at the beginning. At the beginning, you have to have the stamina of an NFL coach. That lady will be in pain as she trains for the Superbowl of her life. And, you’ve got to keep her from quitting. Yes, it’ll hurt some when she nurses in the first couple weeks. Remind her that Dick Butkus and Jack Lambert might have felt some pain too. But they made some hard hits and scored some points out there.

Have you ever sat in a pediatrician’s office, dude? I mean really sat in that petri dish of a waiting room where snot reigns supreme and the Muzak is obliterated by the screams of infected infants? Eye infections. Allergies. Green vomit. It’s all there, man. Well, you won’t be there much. Your kid will have the immune boosting benefit of white blood cells that get manufactured on demand, on site, at the first sign of your baby’s sniffle. The technology is right there in your girl’s cantaloupes. For real. Who knew?

But here’s the catch. If your babe is going to make your baby a candidate for Harvard and the NBA, while keeping you from catching the swine in a waiting room, there’s a pay back. You’ve gotta be cool for a bit. Maybe even keep it in your pants. Or, at least keep it in the shower. Breast feeding boot camp often — though not always — lowers estrogen levels enough to impact a woman’s sex drive. Oh, and there’s one other problem. That dudette is so damn drained that when you get home from work, she’ll most likely want to hand you a stinky bundle and take a long nap. It’s all part of the game. You’re on the team and she’s just handed you the ball. Run with it. And pray she stocked the freezer will plenty of pumped supplies. How long will she behave like a sexual anorexic? Well, as long as it takes. And if the going gets really rough, buy her a steak, some new shoes, and remind her about the corkscrew motion.

Remind her politely. Because breast feeding mamas may have the cha-chas of La Madonna, but they also have the heart of a mother bear. Tread carefully, brother. This is a woman wired to protect her little miracle above all. This is not the time to argue over the bills, the laundry, or the room service. She’s focussed on winning the game. She needs a trainer, a coach, a team physical therapist, and a paycheck.

So, what’s in it for you? You’ve given back rubs, cooked too many dinners, and may even have gone so far as to change a toxic diaper. Why? Too many things to name, dude. Let’s start with the kindergarten holiday concert. The first pee-wee soccer game when your “team” wins. The giant hug you get from such tiny arms. And, most of all, the screams of glee that you get when you walk in the door. You are Superman if you can support your gal enough to take you to this place of wonder, and you’ll be on the long haul toward marital bliss. As for those milk bombs?  Don’t stress, dude. They will be back in your possession before you know it. Back off junior. There’s a new sheriff in town. Daddy owns the boobs again.

Author’s note: This piece of humorous truth was written in response to a disturbing statistic: The number one factor in a woman’s decision to nurse her child, is her partner’s attitude.

One thought on “How to Be a Breastfeeding Father”