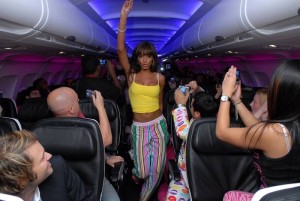 Virgin America Airlines is Using a Hip, New Technology to Make Bi-Coastal Travel Anything but Banal.

Somewhere between Los Angeles and New York, I rose from my seat  — 4F. Praying that my too-high Prada boots could master the light bumpiness, I strutted toward the bathroom at the back of the plane. Amidst the shagg-alicious purple and rose lighting that gives Virgin’s main cabin an air of a James Bond movie (circa 1968) I neared the last ten rows of seats. It was then that my peripheral vision detected a few heads bobbing up and curious eyes shooting my way. I wondered who was “ace” in 20D, and “hef” in 24D, or if “elbubble” had logged off before she learned I was walking to the back. And what did the person who had bought me the drink look like?

I should tell you that this attention has nothing top do with my looks, per se. This silent, though awkward, introduction was a direct result of a seat-to-seat chat group chat that I had initiated. It is Virgin’s latest bid to fully secure the attention of that coveted demographic — young, monied, tech-friendly, hipsters. And, let me tell you, it’s kinda cool.

I would argue that I am the bravest extrovert on the plane, maybe on the planet. Many people are a little too shy to barge onto a strangers private screen mid-air with an invitation to chat, but not me. I looove new tech and I love to watch how people relate, so this flight was a perfect match for my two loves. The start was inauspicious. Using the handheld keyboard and the touchscreen on the seat back in front of me, I choose a screen name, “Doctor” and randomly selected twelve seats on the plane to “invite” into my chat room. I swallowed my pride as most declined my invitation but a few stayed. As we started chatting they invited others whom they wanted to get to know. At one point we realized that “David” in 24D was the only dude amongst a gaggle of gals so he cheekily changed his screen name to “hef.” The conversations roamed from books, to professions and onto to nightspots in our destination city. A really nice chat-mate named “ace” even took drink orders and bought a round for the group. When the flight attendant surprised me with the drink, it came with a handwritten note from “ace” that had been written on scrap paper that was the back of a screenplay. This launched us into a conversation about screenwriting. “ace” prefers horror. I prefer Rom-coms.

Soon other chat rooms began to open simulteneously. Private ones. Some adventurous text-fiends broke away to create more personal conversations å deux. One young man flirted and flattered me in chat room number four by calling me Mrs. Robinson. This is exactly the kind of thing Virgin hopes its passengers will do. Make flying feel like an opportunity to meet and mix rather than a tiresome bus ride.

As I waited in the back of the plane for a bathroom vacancy, I chatted with a flight attendant about seat-to-seat chat. She says it’s becoming wildly popular and is always amazed that on every flight, some chatting duo eventually meets at the back of the plane to get a visual and exchange the digits. Our conversation was overheard by bathroom line eavesdroppers who rushed back to their seats to log on. By the time I returned to my seat “hef” had some serious competition in chat room two. And the young man in the private chat-room, the one who fancied himself “the graduate,” had eyeballed my aisle walk and texted me his real-world email address.

Oh, and did I fail to mention that love isn’t the only thing in the air on Virgin America?  Business networking happens to. A friendly young film executive dropped by my seat to give me her card after seeing me chat about a screenplay I am working on. Love and money. Virgin America, you are on to something big here.