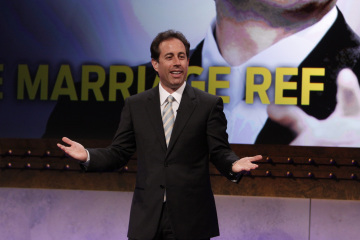 NBC’s new prime-time reality show is smothered in sauce, low on any real meat, but it’s the high fat we sometimes crave.

Okay, the critics hate it. But there is something refreshing about NBC’s new reality show, “The Marriage Ref” — it’s a new format. With Jerry Seinfeld’s genius behind the show, including his trademark ability to make six minutes of comedy out of a minute piece of life’s banality, this sit-come-meets-America’s-Funniest-Home-Videos could find an audience.

In “The Marriage Ref” sneak-peek pilot, Jerry Seinfeld and a celebrity panel that included Alec Baldwin and Kelly Ripa pick a winner on some  of the most bizarre couples arguments ever to make it to national television — whether a man can keep his deceased dog after a “resurrection” at the taxidermist, and whether the time is right for a longtime married couple to install a stripper pole in the living room.

Audiences learn in host Tom Papa’s opening monologue that this show in no way is intended to be real couples therapy when he advises people to stop looking for their soulmate and instead find someone they can sleep next to without throwing up. In fact with so much laugher there’s no way the show could ever deal with the sensitive trials that throw real couples on the rocks.

The American Idol style banter by the judges is given a whiff of credibility by the lovely Natalie Morales of NBC news who spouts statistics like “one thousand Americans have had their pet stuffed” or “stripper pole exercise can burn many calories.” A weird appearance by a now elderly sportscaster Marv Albert, who gives a play-by-play on the couple’s knock-out punches, is only interesting if you are old enough to remember Marv’s own infamous sex scandal.

As a Mom whose thoughts carry the daily burden of Haiti, kids grades, Afghanistan, and recession woes, The Marriage Ref is a light respite. A chance to giggle at silly family problems that shouldn’t ever be taken seriously anyway. Still Twitter hounds, Bloggers, and some real TV critics were clearly not blown away by the opening episode. But I am a mother who loves to nurture and give my children a second chance to succeed, so I’ll tune in again. Plus, the revolving celebrity panel promises future appearances by Madonna, Larry David, and Tiny Fea, among others. There could be some comedic jewels in upcoming episodes. I mean, who doesn’t want to hear what the material girl has to say about marriage?