Back when my kids were babies, I always rushed to pick them up, to rock them, to sing to them, and to basically continually shower them with love. I spent wall-to-wall time with my tiny Angels, giving them baby massages or engaging their mysterious little whims. When I had to leave them it was only for short periods and I was paranoid about the quality of childcare providers. But I did this at a cost. I endured the glances and comments from a chunk of our society who imagined that I spoil my children. And that this kind of spoiling could come to no good. 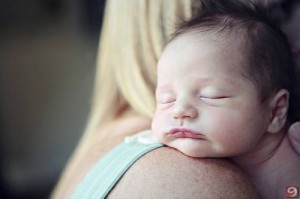 There is so much debate in American culture about how best to parent an infant. To let a baby cry or pick them up. To teach them to self console or help them learn to depend on another for help in stressful times. At odds are the capitalistic pressure for people to grow independent quickly and the more socialist idea that we are an interconnected species with elaborate social structures that require a system on interdependence. You know, the ability to lean on another’s shoulder when needed and offer a hug when asked.

Well, now new research supports my personal maternal instinct. Researchers from Harvard, Duke and Brown pulled data from a 1960’s study on mothers and infants. In the original study psychologists observed the interactions of mothers with their eight-month-old babies and ranked the quality of a mother’s affection from little to normal to excessive. (Note the bias terminology from the 1960’s — “excessive” implies that it is too much, even before any hypothesis has been proven!)

Then, more than thirty years later, a new group of researchers tracked down nearly 500 of those babies, now in their mid-thirties. And guess what? The group who received the “excessive” mothering had the lowest rates of depression and anxiety and the highest functioning relationships. Perhaps most interesting is the fact that no exception was made for children who came from stressful economic conditions, indicating that a mother’s strong love can be a buffer against the affects of poverty.

So I can exhale. My kids won’t grow up to be selfish brats. Hopefully they will have good mental health and, just as importantly, will have great empathy and compassion for others. Now if I can only get them to make their beds and hang their clothes up without damaging their psyches!

4 thoughts on “The Truth About Spoiled Babies”