A chunk of recession-weary Americans are taking aim at a working mother’s four-day vacation.  Please people, take a chill pill. While Michelle Obama spends a whopping four days on her own nickel in Spain with close friends and family, some Americans are likening her to Marie Antoinette, the French Queen whose teenage over-spending, gambling and partying led her to the guillotine, despite her passion and excellence as a mother. 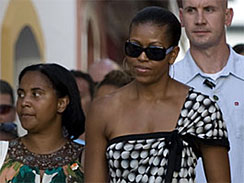 I think the real target for people’s unhappiness is the slow recovery of our beleaguered economy. People are hurting. Big time. Reports are that one-in -six Americans are in default on their mortgages and those of us who are shopping new mortgages are being turned down by banks frozen with fear.

So, a smiling matriarch in a pretty dress in a Spanish beach town has our feathers ruffled. Undoubtedly working mothers feel the sting most, as they (we) are being pulled in many, many directions and can see no light at the end of an ever blackening tunnel. I get it. I understand. But to slam a member of our girls club, the babe who has the ear of the president, isn’t going to help.

Every mother deserves a vacation, even a First Lady.

One thought on “The Brouhaha over Mom Michelle In Spain”