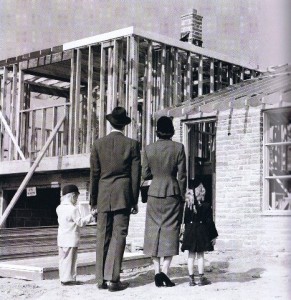 Families are changing. And that’s not all bad news. I have a theory that rising divorce rates, declining marriage rates, and the growing acceptance of variations of the family model (single parents, grand-parent guardians, gay parents, etc) are really quite normal. At least normal in the sense that this shift away from a traditional nuclear family, with rigid gender roles that place undue burden on women, is the beginning of a march back to better outcomes for more children.

If you are still captivated by the belief that a “traditional” nuclear family, that is, one with one father who is male, one mother who is female, and children who are biologically related to those two, is the very best thing for humans to be raised in, you are not alone. I was convinced of that myself. And I still believe if a single parent does not have an elaborate support system of family and friends and a good economic base, children would be much better off living with two parents who hold a biological interest in their welfare.

But there’s something even better for kids and it has little to do with a family model that looks like an episode of Leave-It-To-Beaver. The idea that a lone woman should be left alone in a tract house in the suburb for fifty hours a week with a screaming bunch of small, hungry children is insanity. No wonder the news is chock full of stories of mothers abusing or murdering their children, or why postpartum depression is the darling diagnosis of our generation. 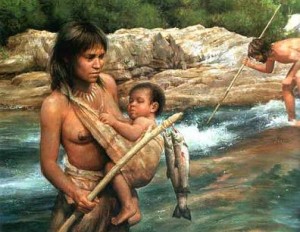 To understand what is “natural” for our species, there are a few physiological and anthropological facts about homo sapiens that you need to know. I might remind you that for roughly 3-million years some form of humanoid lived a nomadic hunter/gatherer existence. We have been farmers for less than 7500 years and we’ve been laborers and office workers for about two hundred years. Our biology hasn’t chanced as fast as our environment and our supreme intelligence expanded and was nurtured during the hunter/gatherer phase of evolution. This phase moved us along. I believe that in recent years intelligence, empathy and ability to connect and bond is on the decline. (I’ll explain more later)

These are the six pieces that will help you solve the puzzle of what is most natural for human child-rearing:

1. Human Babies Take a LONG time to Mature. A sacrifice for walking upright is that homo sapiens give birth to extremely immature offspring. Most animals are up of all fours and running with the herd just hours after birth. Humans take 3-5 years on in arms and close protection to keep them safe. A huge burden to mothers.

2. Mothers Can’t Always Count on Fathers. Human’s have the widest range of paternal investment of any primate. A father’s investment in his own offspring ranges from a single deposit of sperm to a doting “Mrs. Doubtfire,” the Robin Williams film character who gets a job as his children’s Nanny just to care for them.

3. Hunter/Gatherer Mothers Worked Outside the Home. Of course her workplace, the Savannah, was a baby friendly environment because she wore her baby to work. When that little bundle became ambulatory she would leave the toddler in the encampment with sisters, older siblings, cousins, uncles, and grannies. And she worked only about twenty hours a week.

4. The Grandmother Gene. We are the only species except Orca whales who has menopause, 40-50% of a woman’s lifespan where she is active, healthy, wise, and nurturing.

5. We Hand Our Babies to Others. We are the only primate that will hand our baby to a stranger minutes after birth. Try wrestling a baby chimp from his mother and you’ll lose an arm. She holds and baby clings for at least nine months with no one being allowed to touch. Humans are quick to share their burden.

6. One in five women do not bear children themselves. There are currently 20% of women in their 40’s in America who are not biological mothers.

Get the picture? If Dad couldn’t always be counted on, Mom needed to earn a living, and neighbors, relatives and grandmothers were available, how do you think families looked? No way they consisted of two adults in a hut with their children.

In fact, according to my favorite anthropologist, Sarah Blaffer Hrdy, of University of California, Davis, it was this co-operative parenting that helped our brains, emotions, and social structures become so advanced. In her book, Mothers and Others, The Evolutionary Origins of Mutual Understanding, she blows the lid off any notion that a nuclear family is anything but a recent invention by farming and industrialization. And she makes a clear case that early life exposure to CONSISTENT multiple attachments is the best thing for children. The wider variety of consistent faces that an infant had to decode and communicate to without words, the smarter the baby. I put the word consistent in caps because attachment injuries and separation anxiety are very damaging to children, and emotional stress prevents brains from developing to their fullest capacity.

So, when I hear about the modern villages within urban settings that are cropping up with single parents, gay parents, concerned uncles, and grandmothers nearby, I exhale. The apocalypse is not near. Babies are being loved. Far more important to a child’s development is consistency of attachments, emotional connection of caregivers and number of interested adults. Now that’s natural!

4 thoughts on “The Insanity of “Traditional” Families”