As I write this, my youngest daughter is minutes away from visual proof that an old man with a beard came down her chimney and made her dreams come true. My older daughter, a Twilight fan, plans to grow up to be a Vampire or, at least, a Werewolf. In Wisconsin this week, thousands are flocking to see the first ever, Catholic approved siting in the United States of an apparition of the Virgin Mary. Also today, millions of people around the world will not question the historic birth of a man who is reported to have walked on water and fed entire raves with only a couple bagels. 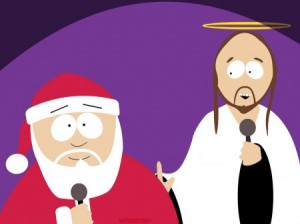 Is this belief in the supernatural all insanity? Not necessarily. It’s also very scientific.

Medical studies abound about the high survival rates of those with faith verses those without. Religiosity helps people cope with illness, and may even impede the progression of disease. One analyses looked 42 studies (surveying 126,000 patients) found that active religious involvement upped the odds of being alive at a follow-up appointment by 26 percent.  Another study out of Dartmouth medical school showed that people recovering from open heart surgery were three times more likely to survive if they had religious faith. Yet another study from Yale University showed that black women with breast cancer had lower survival rates than white women — unless they were religious. Then they were much more likely to outlive their white sisters. In India, doctors scratch their heads as babies born to strict Muslim families in poverty have higher survival rates than upper caste Hindus with less religion. And disaster stories abound of atheists who succumbed to death while those with faith calmly waited for divine intervention, or at least a rescue boat.

That scientific evidence alone is enough for me to sign up. Except for that we are at a peculiar crossroads in our cultural evolution. A byproduct of education and economic prosperity is Atheism. The number of non-believers are on the rise as my educated peers replace pastors and church with psychologists and live sports events. And as traditional churches lose patrons a weird backlash of conservatism from the pulpit, a battle cry for survival, has morphed a sweet Sunday service into a diatribe against those who worship Gods in other costumes. Judging by heated theological conversations, joining a religion today seems more like signing up for war rather than finding inner peace.

We are in a time of great spiritual transition. We know faith can be powerful. We have relayed on religious communities to support our families. And, we are becoming too smart for our own good. What’s the answer?

But perhaps the best place to find God isn’t in a scripture, a pew, or an ashram. It isn’t in the educated circles where money and good health turn religion and science into light cocktail party jousting. It is in the vulnerability of our peoples.

Last week a Haitian cabbie drove me from JFK airport into Manhattan. My fate in his hands for nearly an hour, we bonded over the state of the human condition. This man had not only been near ground zero at the moment planes hit the World Trade Center and watched people jump to their fate, he had witnessed hurricane Katrina first hand, and most recently been in Haiti, digging through the rubble of a school to pull out the bodies of his two nephews. The teens were just a year shy of graduation and my cabbie and his brother thought it safer to leave them in a good school in Haiti rather than expose them to the risks of young black men in New York city.

I couldn’t add much to the conversation. I didn’t have any theological quotes in my back pocket that might comfort him or douse the rising fire of anxiety in my own stomach. I was simply at a loss and could only muster one question. “Where is God?” I asked.

He was slowing to a red light when the stupid question popped out of me. There was a pause while he brought the cab to a full stop. Then he turned, looked through the tiny window that separated the herd from the shepherd, and actually smiled. “God is here,” he said. “You forget to look for him when things are going well. Then, when PEOPLE do bad things, you ask ‘Where is God?’ But he is here always.”

He (or she, or it) is certainly here under our Christmas tree today, just as he, or she, or it appears at Ramadan and Hanukkah. Fueled by human connections called love, God is the life-force that will sustain us in good times and horror. It’s the superhero in all of us. To eliminate God is to eliminate possibility.

One thought on “Faith, Science and Superheroes in the Age of Anxiety”