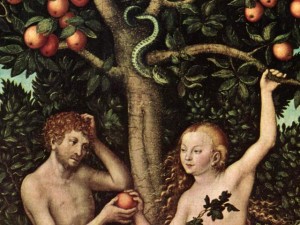 We all know that a woman’s sexual power is nothing to be trifled with. From Eve to Cleopatra, stories of women who ruled man by his desires for her fruit, are legend. But when a college girl twitter trend cropped up this week with girls tweeting photos of their boobs emblazoned with their school team logos, I saw weakness not power. Sexual power in a high-supply sexual economy is pretend power.

That’s because women’s ultimate genetic survival is dependent on having a protector/provider during the vulnerable years of pregnancy and nursing as much as it is dependent on conception. While plenty of women these days have the economic power to hire such “alloparents” (nanny’s and coaches who replace fathers) the statistics still aren’t good for single mothers: Their children have 8 times the risk of physical, emotional or sexual abuse. They are more likely to suffer academically, behaviorally, and have earlier onset of sexual activity. I should know. I’m a single mother who works triple shifts to beat these odds.

When women use sexual power to lure a man into procreation and not partnership they are risking their genetic potential. Men don’t bond through sex. They bond through trust and they rarely trust a woman who uses sexuality as her power.

By the way, women are also more likely to contract an STD than men, have medical complications in pregnancy, or simply get left with an acute case of a broken heart. And you never hear about that on The Bachelor.

My advice to the U_Boobs on Twitter who call this campaign feminine power? Button up and open your eyes. Your female peers who are hitting the books and not hooking-up are quietly closing deals with the shrinking population of men who are still willing and able to make a commitment and invest in their offspring. You’ll see their wedding photos on Twitter.

6 thoughts on “FOR WOMEN: Why Sexual Power is Pretend Power”