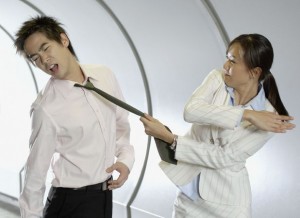 Recently a concerned mom contacted me online to tell me that her seventeen-year-old son had just received a nasty slap in the face after he paid a girl a poorly worded compliment. My first reaction was astonishment. In this day and age where young women are aware that domestic violence is a crime, why would she have resorted to a physical strike when a tongue-lashing might have sufficed? No matter. The resilient young man was apparently more concerned with how he could win her back. (I won’t analyze that.)

To get the best advice possible, Mom kindly gave me details of their relationship, his crime, and their photos. They had just met, and after a lengthy chat, were in the process of setting up a coffee date. Fueled by this minor victory, and testosterone, and inexperience, the poor dude let slip that he thought the young lady had “awesome curves.” Oops!

That’s when she asked him to remove his glasses, which he did, perhaps hoping for a kiss, and instead got a wallop on his kisser. Yikes!

Mom: “So instead of landing a date for the weekend, he was left there standing alone, nursing a sore cheek. My feeling is he should apologize to the young lady and explain that he was just trying to tell her she was beautiful. Do you have any thoughts on this?”

First I checked the photos. Indeed, this young woman has AWESOME CURVES!!!! The kind of curves that get in the way of deep conversation and make it really hard for others to see her brain. I know her pain. I was so happy when I got old and my face finally grew into my brain. This poor brilliant girl is sick and tired of guys who find her intellectually and emotionally invisible. Now I understand the slap. So here’s what I suggested:

Dr. Wendy: Ouch! Don’t you hate those lessons. Poor guy. The only suggestion I have is for him to send an email saying his comment was meant only as a compliment, not as an attempt to sexualize her. Tell her that her mind was the thing that attracted him first and that he feels bad about the fumbled compliment. As much as he wants to, don’t bring up the slap. She may apologize easier if it’s not demanded of her. In the end, if she takes off, then he’s probably better being rid of a highly sensitive woman prone to violence.

Did I say the right thing? You be the judge. Here’s her response:

Girl: You also showed lots of maturity by coming back with a sweet and sincere apology. Most guys would not have done that. So….if you still want to, maybe we can start over and have that tennis game we were talking about? The ball is in your court….pun intended
P.S. I have an eye for fashion and love your frames (glasses)! Guess you probably figured out that I didn’t want to damage them.

Now where would these two have gotten if someone hadn’t turned the other cheek and reached out with kindness and respect? These two young people have learned so much about communication, sex, genders, and humanity in this one, painful lesson. Both of them had the courage to make repair. Because it is during our ruptures and repair that intimacy grows. I wish them well.

Oh, and I gave one final bit of advice to the well-meaning Mom. I told her it might soon be time to take the training wheels off her son’s to love life and let him ride solo — especially if he comes home with a different color of red on his kisser.

8 thoughts on “FOR PARENTS: Boy Fumbles, Girl Slaps, Is There Room for Repair?”