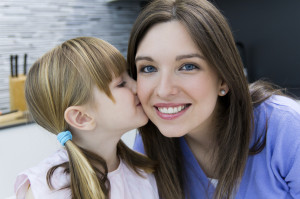 With the rate of American babies born out of wedlock continuing to climb, (it’s currently 44%) it has increased the number of single mothers on the mating market. In fact,  I’ve had a number of conversations lately with single mothers about the idea of getting married again. While plenty are happy to raise their kids alone, and prefer to keep a lover in a romantic compartment in their lives, others dream about being a real couple.

I happen to fall into the later camp, although I’ve long ago dumped the notion of a blended family. After I saw the chilling statistics about children and “steps,” I put my love life on hold. Sadly, one of the most dangerous places for a child to be is in a home with non-biologically related males. That includes mommy’s boyfriend, husband, or teen step brothers. These kids have eight times the rate of emotional, physical and sexual abuse. As I’m raising girls, I’ve decided that my nest will have to be nearly empty before I introduce some foreign testosterone into my household.

But I know that other single mothers are dating and hope to find love while raising kids. So, I have applied my intellectual mind to the study of what makes women marriageable. I have some real-world role models, too. Sherryl Walsh (no relation) had been a single mother of FOUR for ten years in 1975. That’s when she married her coworker, Neil Walsh, a single, child-free man of only 30. Sherryl was 36. Recently, Neil passed away, after 34 years of marriage — and when I called to offer some words of condolence, I also asked Sherryl for her advice. If a mother of four could find a great husband in 1975, she had to know something I don’t. Her advice was simple: Marry a good friend. Neil was a good friend from Sherryl’s office. Their friendship lasted almost 40 years. Sherryl, now I’m looking a little closer at my plumber, my agent (too young), and the guy who fluffs my latte at Starbucks. Because those are the guys I “work with.”

I also spoke with another MILM role model — astronaut Buzz Aldrin’s wife, Lois. I have met her a few times over the years at charity events, and one time I cornered her at a cocktail party and asked her how an unknown, middle-aged mother of three could snare one of the most eligible men on the planet (I didn’t use those exact words, though). Lois gave me some interesting advice. She talked about helping a man feel like a king in his own household. Some people say that Buzz, despite being the second man to walk on the moon, was all but forgotten until Lois got hold of his public image and put him back on the map. Her technique seems to be to make herself indispensable, and to remind him how valuable he is. I’ve always said, “Water what you’d like to grow. Not the weeds.” Lois seems to have watered his self-esteem, and man, did it bloom!

The research is clear. Men fall in love, not through sex, but through trust and loyalty. If you are a single mother and hope to become a MILM (Mother, I’d Like to Marry) then establishing a trusting friendship is the best strategy. It will also give you time to weed out the deceptive men whom you’ll learn are not so good for your children.

Which brings me to another topic. When I wrote a book called The Girlfriend Test: A Quiz for Women Who Want To Be a Better Date and a Better Mate, I interviewed 100 married or committed men and asked them why they chose the gal they were with, and why they didn’t marry the rest of us. Their answers were sometimes hard to hear. Despite the rumor that women are too needy, I more often heard from my interview subjects that women were “too independent.” When pressed for more details about what that meant, men couldn’t describe it well (they are the gender that excels in brawn. We are the gender that excels in words), except to say that they found themselves thinking, “What does she need me for?” Ya see, men like to be needed. Actually, all people like to be helpful and needed. But men feel really good when they can fix something.

And someday, my own nest will be closer to empty. So, for now you can wall me a MILM-in-waiting. LOL. I do believe that women can have it all, but not necessarily all at the same time.