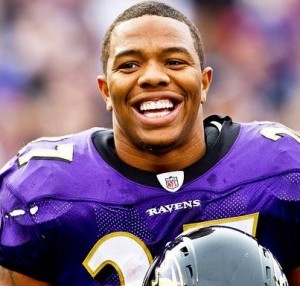 ESPN reports today that Ray Rice is appealing his suspension from the Baltimore Ravens for knocking his fiancé unconscious, under the grounds that “he was punished twice for the same offense.” Whatever the NFL decides, twenty years after the murder of Nicole Brown Simpson and the ensuing OJ Simpson trial, we, as a culture are still confused about intimate partner violence.

A twitter hashtag flood called #WhyIStayed has victims desperately attempting to describe the invisible shackles that bind them into a cycle of love and violence. Others are firing back with tweets that this is the wrong conversation and the hashtag #WhyHeHits has emerged. Still others are taking the eye-for-an-eye argument, reminding us that women hit too. (Surely a 200 pound man has the ability to walk away. When a woman lies on the floor unconscious, she can’t retreat.) But all these conversations are the wrong ones.

If one in four American women will become victims of intimate partner violence in their life time, then one in four men are potential offenders. I remind you, these are not crazed psychopaths living on the street. These are our brothers, and fathers, and uncles, and boyfriends, and husbands. They are not monsters. In fact, to outsiders they may appear to be good boyfriends and good husbands. And too many women who had a father who abandoned them as a child, think long and hard before tearing a father from the lives of their children. But I am digressing here, into that #WhySheStays conversation.

The much bigger question for our society as a whole is, what are we doing wrong? How is it that twenty-five per cent of our boys are being raised to strike instead of negotiate? How is it that the only tool available to many men in moments of deep emotional frustration, is the fist? And, trust me, there is no environment more frustrating than our personal romantic relationships. It’s a hallmark of intimacy — we save the most sadistic parts of our personality for those we love the most. If our lover is still present after the infant inside emerges to take a tantrum, then we know it is real love. But violence is more than a tantrum. It is a the act of shutting down a perceived attack that hurts more than words. Too many men are not taught to manage their feelings. Boys are taught that crying is weak. Sharing prickly feelings like fear and shame are unmanly. And, because women excel at verbal communication, men may feel ill-equipped in comparison, when trying to express their feelings.

And there’s another problem. We teach boys to hit. When a parent uses corporal punishment, they are assaulting a tiny body full of love and trust and wonder. Some of my social media followers are quick to point out that not all children who were hit grow up to be hitters. While I can’t say that all abused boys grow up to be abusers, we know that abuse has devastating effects on the psyches of all. Let’s start a new hashtag today #StopHittingBoys. It’s time we stop raising domestic violence offenders. And we owe it to our boys (and girls) to help them make sense of their emotions.