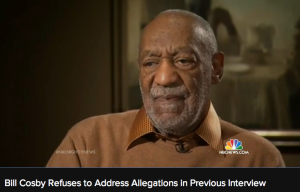 I have been hesitant to write about Bill Cosby. News of the aging comedian’s sudden infamy as an alledged serial rapist has been throbbing in me with the dissonance of a wisdom tooth extraction — a necessary loss with a real pain. My dissonance has less to do with merging Bill Cosby the comedian with Bill Cosby the drug wielding sexual predator, and more to do with with the viewing of historical sexual practices through today’s lens. What would have been a dark footnote in our country’s history, listed alongside witch-burning and White House slave-owning, has become a modern-day public lynching. The cultural shift happened so fast that the old man hadn’t even taken his last curtain call. There’s a kind of discomfort when a historical villain is alive today.

And that’s my problem with this story. Taken in the context of the 1970’s sexual revolution, where a yet undefined female sexual freedom met with alcohol in dark places, how did we draw the line between sex and sexual assault? Surely in a different way than today.

Don’t get me wrong. The sexual rules needed to change. Unconscious women cannot give consent. There are real victims here. These were real crimes with longterm consequences. A betrayal by a revered colleague pitches and jabs through a victim’s love life. Emotional wounds scar like that. Victims can walk around for years looking no worse for wear until, in a critical moment, they morph into what boyfriends like to call “a crazy bitch” duking it out with relationship ghosts, zeroing in on mistrust in the most trustworthy places. Or worse, choosing pain over security because that’s what they know.

With awareness growing quickly, lawmakers have been scrambling to keep up. An increasing number of whistle blowing women in the media and men and women in law and politics are working to rewrite the rules of sexual conduct and draw hard lines in the sand. We’ll figure this out. Already California has passed a law whereby anyone engaging in sex on the campus of a State funded school must first obtain verbal or written consent. (Good luck finding a single definition of “sex.”)

The silver lining in all of this is that we’re finally talking openly about consent. We’re talking about sexual conduct. The rules are being clarified in the media. And we’re helping a new generation of “hard-on impaired” men understand the enormous differences in male and female sexuality. Because of this, many rapes will be prevented. And if a spoiled celebrity of an old man is our sacrificial lamb, then so be it. I’ll sit with my discomfort.