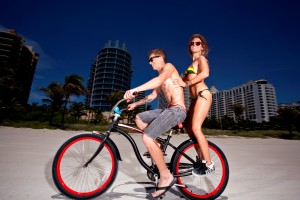 Things aren’t so bad in Florida. People are becoming richer and, if you look at the numbers only one way, increasingly single.

The U.S. Census Bureau recently released 2014 statistics that show the average Florida household brought in nearly $47,500, the highest since before the great recession. This is a good news/bad news story for single women. Those much maligned “gold diggers” might do well in Florida to live out their naturally evolved instinct to gravitate toward men with resources (the better to feed hungry infants in our anthropological past.) But it’s bad news for high wage earning women, who tend to have higher divorce rates when they marry men with fewer resources.

“Married couples are usually the most astounded by our show,” says Walsh, “Because they are the true survivors of the fittest in the increasing competition for mates. And one lucky couple can win our Long Lasting Love Test, that looks at age of marriage, length of courtship, even career choices, proving that the data is usually right.”

The news in Florida about marriage rates is a bit deceiving.?The Census figures show that, compared to a decade ago, ?fewer Floridians have tied the knot, having decreased from 54% in ?2005 to a mere 46% in 2014.?But that doesn’t mean?marriage is out of vogue. True that there are more single adults in American today that in any other period in history. But that may be because there are simply more of us and our ages are different.

Look at this chart to see that the decline in both marriages and divorces during the 1960’s through 1970’s. Simply put, those were the years baby boomers were busy growing up, not running to the alter. It makes perfect sense that during those years the per capita marriage rate declined. Rest assured, marriage rates went back up to pre World War II levels, after boomers grew up.

The fact that marriage is alive and well in Florida is evidenced by the success of Cupid Dates, a Miami based special events agency that creates dream dates for married couples. Cupid Dates is a promotional sponsor of Love Lab Live.