One of the most crucial relationship strategies is recognizing?early on that someone is not compatible and simply moving on. Putting a date to The Boyfriend Test is step one in the race for a mate. Because every girl knows, bonding with a low-performace boyfriend is a painful lesson. Sadly, about one-third of American woman suffered some kind of abuse in their childhood. Usually that abuse came by the hand of someone they love. So, for many woman love is entertained with pain and they have poor radar when it comes to reading the signs that a guy isn’t good for them.

That’s why I wrote The Boyfriend Test and why it has endured. Coming in time for Valentine’s Day, a fully revised edition of my best selling book!

THE BOYFRIEND TEST IS TOTALLY UPDATED!

Here’s the back cover copy: Girlfriends, are you tired of fretting over the latest lothario who decided he wasn’t ready for a serious relationship — about 24 hours after you changed your Facebook status? Sick of deleting texts from that dream guy you met on Tinder who turned out to be another F-boy? Well, here’s the perfect cure for your many broken hearts — an ounce of prevention in?The Boyfriend Test.? Americas Relationship Expert and television personality, Dr. Wendy Walsh (a dating doyenne who has kissed her fair share of frogs) shows you how to look at yourself, your boyfriend candidates, and couplehood–and put them all to the test.?The Boyfriend Test?helps you evaluate everything from his first-date behavior, his consistency over five dates and a 90-Day probation period. In this fully revised, second edition of her best selling book, Dr. Wendy digs deeper into the nuances involved in tech dating and the influences of attachment style on early dating behaviors. Funny and wise,?The Boyfriend Test?is a must-read for any woman on the brink of starting a new romance, or on the brink of insanity from her current one! 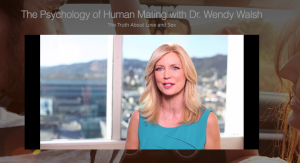 Dr. Wendy Walsh is America’s thought leader on relationships. Her live radio show about relationships airs on the nations most listened to talk radio network KFI AM Los Angeles. A former Emmy nominated co-host of The Dr. Phil spinoff, The Doctors, she is also a regular commentator on CNN and Fox news.