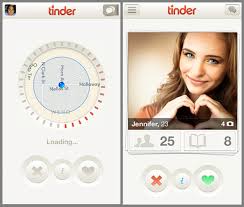 Want to meet a heterosexual human who is nearby, has some potentially fluke hot photos, and will promise to be full of tension and misunderstandings? Then Tinder is for you. Tinder is the hot new dating app for the twenty-something generation that is promoted as the “straight Grindr.” In case you don’t know, Grindr is the gay man’s app that uses GPS to essentially find someone close by to grind your Levi’s on. The idea of a “straight” app that does the same thing is certainly exciting, except for one thing: women use it too. Now if women thought and behaved like gay men, this app would be a giant hit. But instead of kindling relationships, Tinder is mostly starting bonfires that crash and burn.

Don’t get me wrong. While there are plenty of women out there who are looking for the odd hook-up, most don’t need GPS and an app to find a willing man. They simply need to dress provocatively and show up anywhere. If only women understood that there is very little power in seduction as the only requirement for most young men is that you run on estrogen and have a heartbeat.

But the frustration comes from the fact that most of the women on Tinder treat the app like a dating site and most of the men treat the app like a porn site. Yes, there are exceptions to this. Anecdotal stories have mysteriously cropped up on the web from people who know people who found love on Tinder. But those stories have degrees of separation that smell like urban legends. Bottom Line: Tinder is an app guaranteed to reduce speed dating to a microcosm of the gender wars: women want love and men want sex. Of course, men want love too. But most will take sex if it’s offered. And Tinder is one abundant buffet of offerings.