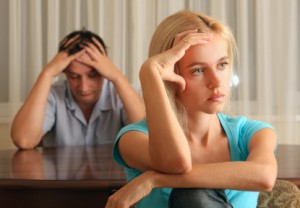 No doubt about it, divorce hurts. And news research shows that some people — particularly men ? actually get some real mental health problems following divorce. But not everyone.

A divorce can be an emotional obstacle for all parties involved, but new research shows that a divorce may not doom all to depression. Many cases of depression that occur post-divorce are attributed to the separation of a family or marriage that occurs. Past research by Augustine J. Kposowa, of the University of California, Riverside department of sociology, found that after a divorce, men are at a higher risk of suicide than women. The increased risk of suicide may be due to a lack of social interaction after divorce, or stress leading to mental health issues, such as depression. However, new research brings new light to the situation.

Researchers from the University of Arizona published a study in the journal Clinical Psychological Science clarifying individuals who face depression, or mental health issues, before a divorce are more likely to struggle after the divorce. Lead investigator on the study, David Sbarra, Ph.D. commented on the correlations of post-divorce depression. He explained that the emotional distress of a divorce can make depression, or depressive symptoms, resurface for individuals who already struggled with this mental health disease, particularly at the clinical level. He also noted that divorce is not random, certain people are more inclined to be divorced, like individuals who are dealing with mental health issues.

In conducting their study, the researchers analyzed information from the national Midlife Development in the United States (MIDUS) study, a longitudinal study with data collected over multiple assessments. They compared participants who were separated or divorced to those who remained married. This allowed them to see attributes of people who would get divorced based on factors they identified earlier in the study. Investigators also found that 60 percent of adult participants who had a bout with depression before their divorce or separation had a post-divorce episode of depression. ?In contrast, only 10 percent of adults without a history of depression encountered an episode of depression after their divorce or separation. They did not demonstrate the same increased risk of depression.

The study concluded that divorce itself does not make people depressed, most people who suffer from depression prior to a divorce do not possess the same coping skills for these stressful situations, which may lead to a relapse. Divorce and separation are emotionally difficult, however, this research sends a powerful message that human beings are far more resilient than we might think.

FREE VIDEO: 3 Secrets about love that nobody talks about. Sign up for my newsletter

Get the love life you deserve in my new online workshop, 10 Secrets of Mindful Relationships! Im excited to share the steps you need to incorporate mindfulness in your current or future relationships. Sign up now on popexpert.com:http://bit.ly/1GOwq3v