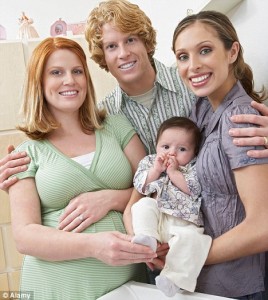 When a child is adopted by a step-parent it can feel like a double edged sword. Under most laws, in order for such an adoption to happen, one biological parent has to give up rights. To a child in the midst of this kind of legal posturing by adults, it can feel like abandonment by one parent and that they are being sold to the highest bidder. But what if the courts decided families can forgo any feelings of loss by simply adding legal responsibility to an additional adult?

That’s the case with the brand new California law signed into legislation by Governor Jerry Brown on Friday. Authored by Senator Mark leno, the bill finally takes into account the fact that family structures have been changing for decades. It also covers same sex couples who may have a biological egg or sperm donor who also has an interest in the child’s welfare.

Not surprisingly, in the era of a shrinking but vocal, hyper-conservatism, some Republicans see the law as an attack on the traditional family. According to the LA Times, “The measure was opposed in the Legislature by the conservative Capitol Resource Institute, which called it detrimental to children. The group said children thrive in homes with their biological mother and father, or with adoptive parents being male and female role models.”

If only they knew that a “traditional” family, one where a heterosexual woman and a heterosexual man live in the same house with both having a biological connection to all the offspring in the house, is a relatively new invention in human’s evolution. For thousands of years, our hunter/gatherer ancestors roamed in multi-generational tribes where most people were related and all these “alloparents” helped raise the offspring. While there was plenty of monogamy, as there is today, there was also some polygamy and some serial monogamy, that resulted in step-children. An offspring’s survival was directly related to the number of adults who took an interest in raising them.

In my opinion, this law is returning to something more natural to our biology and human culture. Kudos to California.

Recently a supermodel said something exceptionally smart. Well, she’s also a mother, so of course she’s smart. I’m talking about that gorgeous Brazilian creature named Gisele, who famously gave birth to her son eight months ago, without medical intervention, in a hot tub. Now she’s rattled the likes of the ladies on The View with a statement to Harper’s Bizarre UK, that breastfeeding should be made law.